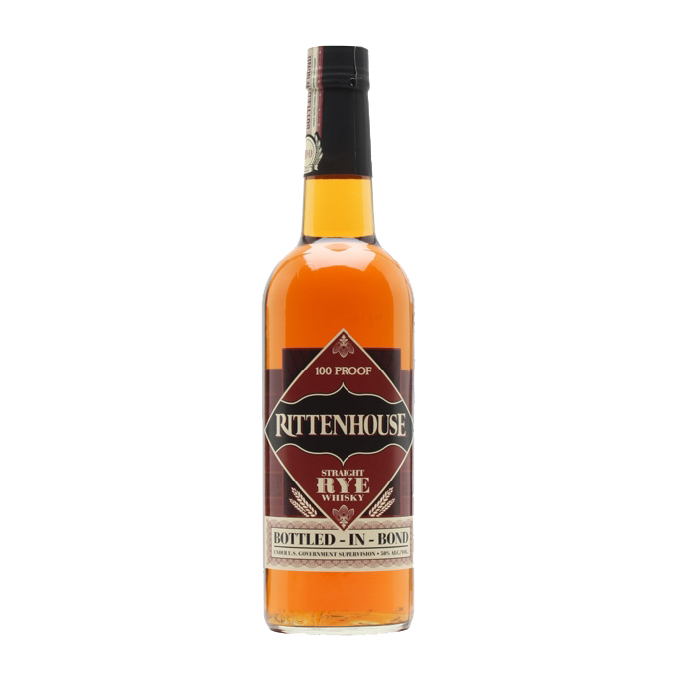 Rittenhouse Rye is produced in the tradition of the classic Pennsylvania or “Monongahela” rye whiskeys, which are believed to have had a spicier and fruitier flavor profile. This style is said to be a high rye mashbill consisting of 80-100% rye grain. Ironically Rittenhouse is a low rye (51%) which is typical of the modern Kentucky rye mashbill.

This is a Bottled in Bond (BiB) rye. To be labelled BiB, the whiskey must be the product of one distillation season and one distiller at a single distillery, aged in a federally bonded warehouse under U.S. government supervision for at least four years, and it must be bottled at exactly 100 proof. Additionally, the BiB label must clearly identify the distillery where it was distilled and where it was bottled, if different.

Nose: A nice mixture of fruit and grain are immediately noticeable. Dried bananas and light peaches are mixed with hints of malty grains. It reminds me of a bowl of breakfast oatmeal in the sense that it’s a pleasing scent but one that’s very mellow and light. Surprisingly, it’s not very spicy at all.

Palate: The peaches and dried bananas from the nose carry over, and now they’re nicely mixed with white pepper with a dash of spice. While the pepper and spice mixture is nice, it’s far from being your typical bold spicy rye flavor profile which you see with a lot of modern day ryes. Instead it’s more on the mellow fruity end. Additionally, Rittenhouse Rye doesn’t have a heavy mouthfeel however it’s also not light by any means. It’s really nicely balanced overall.

Finish: Leather, lightly charred oak, and light peach along with pepper and a dash of classic rye spice are all noticeable. While there’s a pleasant dash of heat up front, it’s not overly hot, and not overly spicy. Dried fruit and white pepper linger for a while on the back end of the finish. While the finish is definitely on the shorter side and I wish it lasted longer, it’s still very enjoyable.