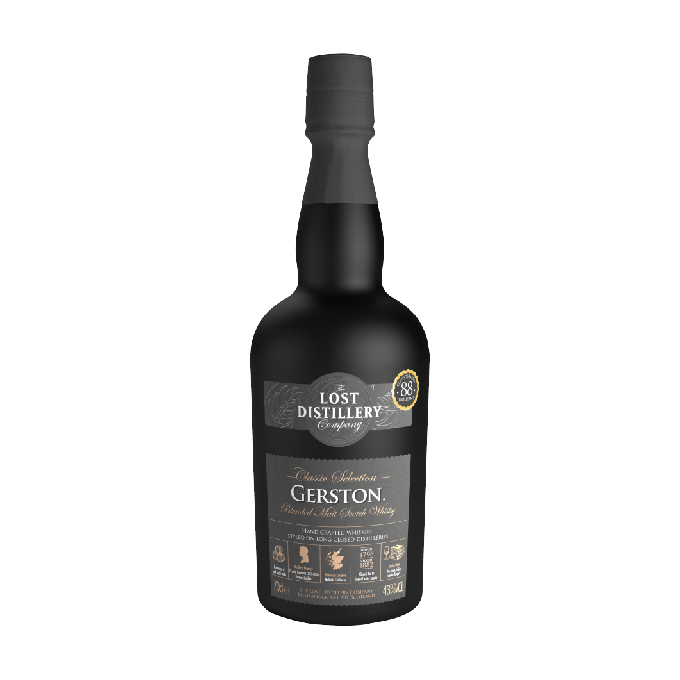 A marriage of 100% aged Single Malt Scotch Whiskies, no added colour, not chill filtered. A modern interpretation of the legendary Gerston One Distillery.

The story of Gerston whisky is a tale of two distilleries, known as Gerston One and Gerston Two. Gerston One was a family-owned farm- house scale distillery, with a typically small output, making high quality spirit that was in demand both at home and further afield.

Gerston Two had four tall stills that were centrally fired by a steam boiler placed at one end of the still house. It had external worms for cooling vapour and the new spirit passed to the receivers again by gravitation.

Whisky was supplied in cask to merchants, private individuals and to local landowners, including Lord Thurso of Thurso Castle. It was most likely the aforementioned Thurso who introduced Gerston Whisky to prominent politicians of the day – including Sir Robert Peel, who was Prime Minister from 1841 to 1846. Other notable consumers of Gerston were the Duke of Wellington, the Bank of England, the Army and Navy Club in London and the Archbishop of York. The cash book also lists customers in Buenos Aries, Calcutta and Madras.

Gerston Two elected not to use peat for kilning barley or for firing the stills, they shipped in coal from the mine located at Brora just down the coast. The much larger stills at Gerston Two produced an entirely different type of spirit – softer and lighter when compared with Swanson’s whisky. The decision not to use local raw materials had consequences for the distillery. Local people bristled against a London based business that was not seen to be supporting the community. This was one of the factors which led to the ultimate closure of the Gerston Two distillery.